At the end of March 2019, pupils from Mark Rutherford School in Bedford participated in a Creative Careers conference organised by The Culture Challenge and the Aspire Higher Team at the University of Bedfordshire. Following on from last year’s successful Creative Careers Conference at the school, pupils journeyed to the university campus to have a taste of their first conference in an academic setting.

After some preliminary research conducted by Mark Rutherford School, staff were surprised to learn that career aspirations of Year 10 boys at the school were particularly low. The focus of the event was to inspire this group, increasing their aspirations, introducing them to a diverse group of role models and open their eyes to a potential career in the creative industries.

The morning began with a number of creative talks and performances as Cultural Providers introduced themselves, their craft and career paths to the group. As the focus for the day was to raise aspirations and increase confidence, we carefully selected creative practitioners who had a strong element of performance to their practice to help students with issues around anxiety, nervousness and pressure. We were lucky to have the following Cultural Providers to share their expertise and knowledge:

Tanga Wanda from Spirit Forge worked with pupils in his hip hop workshop to address character development and personal growth through the unlikely combination with philosophy!

Oz Azubuine from Ozzlebox demonstrated his human beatbox skills to engage the Year 10 boys in his fun workshop which educated and inspired the group.

Lovilia Henry from Creative Beginnings ran a song writing workshop with the group to explore rhyming couplets and encouraged them to brave the anxieties surrounding performance. 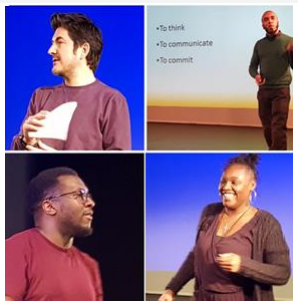 Students were asked a number of key questions before and after they had participated in their creative workshops and had a chance to meet the Cultural Providers to measure whether their aspirations increased as a result of their participation in the day.

How likely are you to apply to university?

There was a clear increase in the number of pupils stating that they feel more likely to apply to University after participating in the day’s activities. This may have been due to their exposure to new opportunities and pathways explained to them by the Cultural Providers they had met, opening their minds to the possibilities that study at university can bring.

Do you agree with the following statement, ‘University is for people like me’?

Those pupils who had been definite in their assumption that university wasn’t for them clearly decreased as a result of their participation in the Creative Careers conference. With the number of pupils who were unsure or agreeing with the statement increasing, it is clear that their perception of what life may be like at university has changed, and hopefully seems ever more likely, even if only in consideration.

Do you feel confident in yourself?

As a result of the Creative Careers Conference, it was great to see the increase in confidence for most pupils. The day evidently opened up their minds to new experiences and provided them with the opportunity to meet with inspiring adults who were successfully working in the creative industries.

What did students learn from the Creative Careers Conference?

Students that were normally shy had their confidence increased. Having the opportunity to meet a range of successful individuals working in the creative industries increased their knowledge in the arts sector.

The event was a clear success, with boys from Year 10 evidently growing in confidence, exploring their own inspirations and leadership and hopefully contributing to the possibility of them continuing their education beyond school in a university setting. The Culture Challenge enjoyed working with the Aspire Team on this activity and were excited to once again work closely with Mark Rutherford School to deliver this activity.

With thanks to the Aspire Higher Team for their support and also compiling the pre and post evaluation data used in this article.