Schools across the UK are invited to take part in the Junior Filmmakers Film Competition for Schools 2020.

10 young people will represent each school that enters and the schools will be divided into two categories – Junior and Secondary.

Participants will be taken through the Junior Filmmakers Training Programme where they will learn about theme, character, story development, script drafting, camera use, pre-producton scheduling, budgeting, crewing, carting, filming and video editing.

Each school will select a film-making lead who will receive training from Junior Filmmakers and act as the lead contract and trainer of the young people in their school.

Junior Filmmakers will provide mentorship, guidance, training material and all the equipment required for the successful implementation of the project in each school.

Entries can be a documentary, musical film or narrative fiction. They will be premiered regionally and judged by a panel of film industry professionals. The regional winners will be judged at a national film premiere in London where the national winner will be announced.

Winners will receive 360 degrees camera equipment and a VR kit for their school. Other prizes will be announced later. 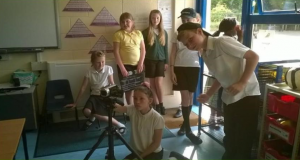